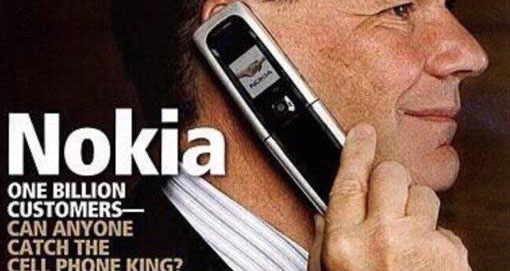 Well, now that I think of it this is not really a recent fact, it all started in the Valley of Elah 27 centuries ago when the underdog David defeated the colossus Goliath. Malcolm Gladwell, one of my favourite authors, wrote a whole book explaining that it was actually inevitable that David would win that battle. Yes, David had all the tools and skills he needed to defeat Goliath.

So this has been going on forever, it is just that now with the speed of change the advantages of the Davids of today´s world become more and more obvious. Examples of these Goliaths that don´t end up well become more and more frequent, Kodak, Blockbusters, Barnes & Noble, Blackberry, and yes, even the almighty Nokia that only 10 years ago was the "cell phone king" according to Forbes.

Common knowledge says that the bigger and more financially resourceful a company is, the more chances it has to win in the competitive battle. We tend to think of things as helpful that actually aren´t and think of other things as unhelpful that in reality leave us stronger and wiser. Perfect example of this are the studies that show that bootstrapped startups have more chances of survival than funded ones.

So why is this happening?


Keeping the organization lean, flexible, able to adapt to change and customer obsessed is the best recipe for success, keep it in mind even if you are a Goliath.

David and Goliath: Underdogs, Misfits, and the Art of Battling Giants. Malcolm Gladwell

Exponential Organizations: Why new organizations are ten times better, faster, and cheaper than yours (and what to do about it)